Home » News and Updates » One of Rob’s Loughborough mates, Nathan, has been in touch with Pip & Lorraine with a touching tribute, and his inspirational story that reminds us all of Rob and his amazing legacy.

Read Nathan’s message in full: “Hi Lorraine & Pip – It’s Nathan here from the good old Loughborough days. Hope you and the family are well and managing to stay on the right side of sane in this crazy world we now live in.

I have been meaning to email you for a couple of years now which is rather embarrassing, so I thought it’s about time I got my bloody act together and did it.

As I am sure you know, when Rob was diagnosed, all of us up at Loughborough wanted to know what we could do to support, and so Rob pointed us in the direction of Anthony Nolan for us to register ourselves as potential donors. This was of course the very least we could do, and so we all signed up.

A couple of years back, Anthony Nolan got in touch with me and said that they had found a match, which came as such an incredible surprise. I don’t know about you, but I always figured you sign up for these things, and nothing ever happens, and so for them to find a match for me was amazing.

Anyway, I went in and did all the tests to confirm my match (which luckily came back positive) and then went in for my stem cell donation. Now I have to tell you, I am a massive wimp when it comes to needles, but Anthony Nolan were so incredible and the procedure was a cinch, although I do think Rob was probably looking down and had a few words to pre-warn them that they had possible fainter coming in.

Skip forward to last year, I receive a letter through the post from Anthony Nolan, letting me know that the transplant was a success and that the young boy who received it was making a full recovery.

Your son, as you know best, was such an amazing person and great friend who touched so many people’s lives. The footprint he left is ginormous and only getting bigger with the incredible work that you and your family have done with the foundation, and now, also because of him, a little boy who he never met has a 2nd chance at life.

As you may know, Tom Hallett is getting married this weekend, and so we were searching through the archives of photos of us all at Loughborough to put up for his wedding and all of the memories (and in some cases lack of memories…) came flooding back. It was so much fun reminiscing and so I have attached a select few which showcase not only our questionable fashion sense but also awful choice of haircuts!

I am so privileged to have known your son and I thank God that he put us in neighbouring rooms that first day of university.

Rob’s Dad Pip commented as follows:
“Nathan was one of the first people Rob met when he went up to Loughborough and he remained one of his closest friends for the remainder of his life. Nathan was one of many hundreds of young people who volunteered to be part of the Anthony Nolan register as a direct result of Rob’s illness. We know that at least eight of these have since been called back for further testing with a view to donating their stem cells, to save the life of another person.

We at The Rob George Foundation are all very proud of this less obvious part of Rob’s legacy”. 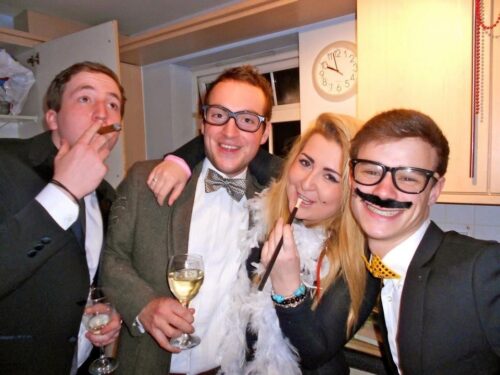