Home » Some things in life are more important than red or blue!

If you want to be inspired, motivated to help young people, reduced to tears, overwhelmed by the love and dedication shown when a family has to function through devastating and heart-breaking illness, then read on and take look at all the stunning photos that say so much!

Back in June 2019, the RGF purchased bunk beds for Edward so he could share precious time with his brother, having spent huge amounts of his young life in hospital. Edward’s mum, Catherine has been in touch to provide us with a moving update that will help us understand what a difference the RGF has made to Edward and his family over the last year.

Catherine told us: “On 31st October 2018, 3 weeks after his 3rd birthday, we were given the devastating news that our son Edward had a brain tumour. He had not been poorly he had just started to lose his balance.

Following an MRI scan at our local hospital we were sent in an ambulance to Alder Hey Children’s Hospital for emergency surgery. We were told that the tumour was large, the size of an orange and was pressing on his brain stem causing hydrocephalus and left any longer he would deteriorate rapidly.
The amazing surgeons at Alder Hey removed 98% of the tumour. A small part was left because it was too close to his brain stem and it was too risky to attempt to remove it. A week after surgery we had more terrible news that the tumour was malignant. A high grade medulloblastoma tumour that would need very intensive chemotherapy to attempt to destroy what remained.

I cannot begin to explain how it feels to be told your child has cancer. Even now it does not feel real, it is the most unimaginable horror and I simply cannot find the words to describe the darkness we found ourselves in.

After a harvest of Edward’s own stem cells, he commenced 5 rounds of intense chemotherapy which ran in a cycle of 21 days. It was so harsh, so intense we barely left hospital over the next 7 months, by the time he recovered enough from the chemo round he was hit again with the next one. During treatment, he received 33 separate blood and platelet transfusions. He was so poorly at Christmas 2018 that he had to have an emergency shunt fitted as the hydrocephalus returned. The shunt malfunctioned, and he also developed sepsis. This was all after just 1 round of chemotherapy.

His final dose of chemotherapy was a high dose, even more than he had already had which meant he had to be in complete isolation. He received his stem cells back to help his body recover from the poison that had been given him to try to save his life.

In May 2019 after an MRI scan and lumbar puncture found no evidence of disease or tumour, he was able to come home. Treatment had worked!

During the darkest times of our lives, not only were we carried every step of the way by our amazing NHS, but we were also overwhelmed with the massive kindness of strangers; charities and foundations set up to support families like us helped us in every way possible.

One of the biggest challenges apart from Edward’s mobility which had been severely affected by the surgery and treatment, was sleep. Prior to diagnosis the tumour caused massive sleep disruption where he had never in his whole life managed to sleep more than 2 hours at a time, on the few occasions he was home during treatment he slept in a toddler bed in our room as we were so scared of his central line and gastro peg becoming tangled.

Edward is one of the lucky ones and is currently 16 months post treatment, which for now, and we pray forever, has worked and there is no evidence of tumour or disease. His mobility is improving every day and just this month he started full time school with his peers.

We are under no illusion that things can change in a heartbeat. We are living each and every day grateful that we are together. Fear of relapse is constant, but we choose not to be controlled by fear, we choose family, we choose making the most of every single day and we choose gratitude.
Thank you to everyone at the Rob George Foundation you really do change lives and you really do make dark days a little brighter.

All of us at the RGF send our heartfelt thanks to Catherine & Edward, and their family for sharing their story with us!

If you have been moved by Edward’s amazing story and would like to make a donation to the RGF, please visit our Making a donation page where you will find various ways to support us! 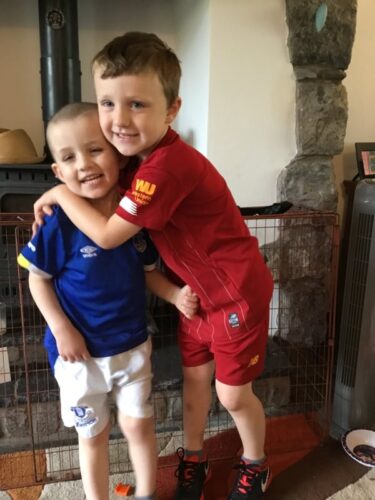