The Rob George Foundation is thrilled to be supporting an upcoming star in the highly competitive world of boxing. Lewis Richardson, aged 18, has just won the National Ambition Boxing Championship, the final of which was held in Croydon on 3 December 2015.

One of the biggest UK amateur boxing championships, the NABC contest attracts young talent from England, Wales and Northern Ireland. Lewis fought 6 separate battles to take the title in the under 75Kg weight and the 17 to 19 year old class.

Lewis, who lives in Colchester and is a member of the Centurions Boxing Club in the town, first became interested in the sport through his brother. Although his first objective was one of fitness, Lewis soon discovered that he was pretty good, especially after having won his first fight at the tender age of 12.

Expenses associated with his sport have meant that Lewis has had to borrow from relatives and seek grants from associations such as Active Essex, where he is nominated as an ‘Inspired Athlete’ – a young person who acts as a role model to up and coming entrants into the sport. The Rob George Foundation was delighted to support Lewis by awarding him a grant to cover fees, pay for upgraded boxing gloves and shoes, and help towards the travel expenses incurred whilst competing in regional and national competitions.

As for the future, Lewis has left behind his junior career in which he fought 39 bouts. He is now old enough to fight as a senior amateur boxer in the 18 – 37 year old category. Lewis’s goal is to make a smooth transition, continue his recent successes and compete at the top national level within the next 6 months to a year. 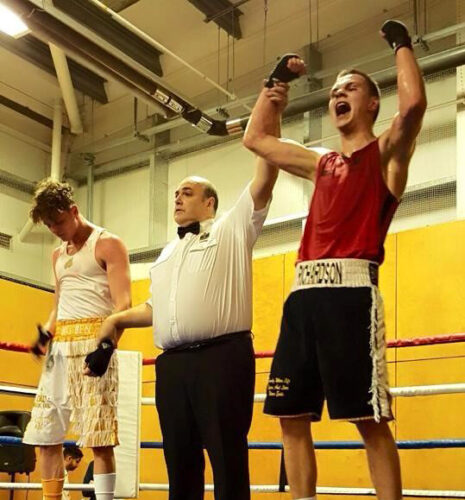