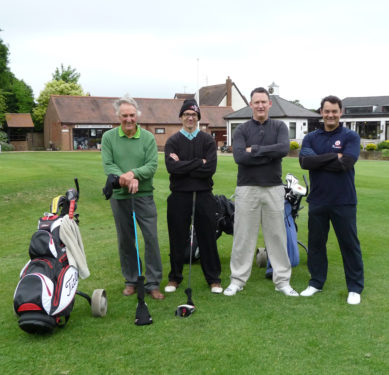 On 2 June 2016 a group of intrepid golfers braved the English summer and played in the Rob George Foundation Second Annual Golf day, which was organised for us by Andrew Duley at the St James Place Wealth Management Group.

The Direct Meats’ BBQ outside was swiftly moved into the kitchen at Colchester Golf Club and with their help bacon butties and sausages were fed to the participants.

Young ‘Fraser Morgan’ provided the entertainment and was warming up for his ‘Hole in the Wall’ gig the following week.  Fraser was donating his time to entertain at this event as a thank you for the help he has received from the RGF over the last 12 months.

After a well attended putting competition the participants headed off for their shotgun start.  Congratulations to the Casque Marque Team, who won with a score of 76 points.

Thanks to your generosity we raised a fantastic £6,068.45!  This money will help the RGF foundation continue its work looking after the adults of tomorrow.

The Third Annual Golf day will be held at Colchester Golf Club on Thursday 25th of May 2017.  Please contact Claire Lumley for further details.