12-year-old, Jack, has been practicing Karate since the age of 4. A time when he loved Ninjago, Power Rangers, Ninja Turtles and wanted to be like them.

Jack’s mum, Mandie, has been in touch to tell us more about Jack and how the RGF has helped him. She told us: “Jack’s immense enthusiasm for Karate saw him join theChelmsford Squad at the age of 6. He fought all sizes and ages in Kata and Kumite and at 8 years, he was accepted into the National Squad. He went on to win Gold for Kumite and Silver for Kata at the Champion of Champions in Essex and received medals for Chelmsford at Belt level.

Jack earned enough ranking points to qualify for the Malta Open Karate Competition at the age of 9. Jack came 4th out of hundreds of children and lost, sadly, to the winner, after 4 fights.

In December 2019 Jack, then 9, was selected for Team England.

Jack was expecting to go to Poland for the World’s Championship, and Italy for the European Championship, but unfortunately these were cancelled due to Covid. Throughout Covid lockdowns Jack continued to practice online and at home.

Now a Brown stripe belt, Jack has been selected to go out to Miami to fight at the Worlds – Team England event in June 2022. This is the highest level a karate fighter can achieve unlessKarate returns to the Olympics. Jack has worked so hard and has waited 2 years to get to the Worlds due to the pandemic. This is Jack’s ultimate dream in Karate sport. Jack is the only child from the Chelmsford squad accepted for the Worlds.

We were looking for sponsors to help with Jacks equipment, Gi’s and 1 to 1 training sessions– enter the Rob George Foundation. The RGF have been amazing with the support they have given Jack making a hugely positive difference to his future development. The RGF need further funding to continue supporting young people across the UK – young people just like Jack. Thank you, Rob George Foundation for all the help you have given Jack!” 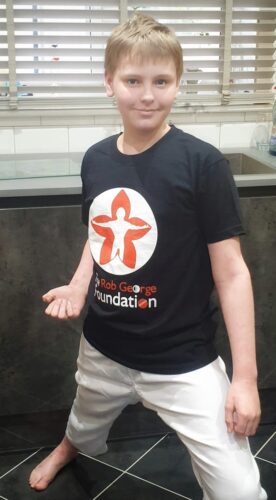