Phoebe is part of the GB Junior Group Pathway for 2019. This year Phoebe and her group have been selected to represent GB at the Irini Cup in Greece where they won the three gold medals on offer for hoop, ribbon and all around. At the English Championships in early June the group won silver all around and silver for hoop. At the British Championships in July the group became British Junior Group champions for their ribbon routine and won silver for their hoop routine plus silver all around.

The group has been selected to represent GB again at the end of August in the García Cup in Budapest.

Phoebe’s mum, Sally, said: “All competitions and GB training camps are entirely self-funded and without the support of the Rob George Foundation Phoebe would have been unable to compete for Great Britain. As a family we are incredibly grateful for the support Phoebe has been given to relieve the pressure of the financial burden of competing at International level.“ 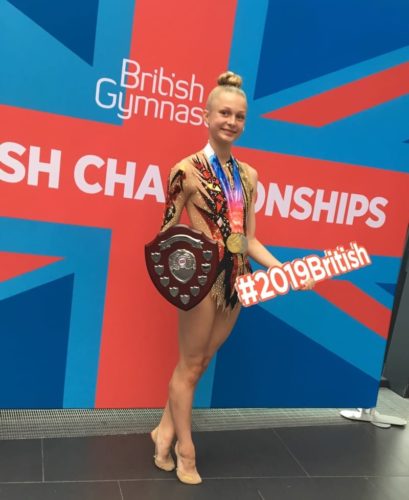