Home » Jamie – Living in a bubble within a normal world

…you are the mum of this lovely little boy, called Jamie, and you have kindly agreed that we could share his gorgeous smile with you all. 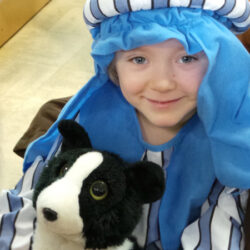 What a cheeky little chap!!  Jamie’s mum has written to us, and agreed that we could share her message:

“I never tire of talking about Jamie….Well at 5 months we noticed both of his eyes were wobbling, nystagmus, so after a 6 week wait and an MRI at our local hospital, it was confirmed that he had a mass In his head.  The week later, February 2010, when Jamie was aged just 7 months, we were told he had a Grade 1 optic glioma. We soon discovered his vision had been severely impaired but it wasn’t until he started school (September 2013) that we realised just how much.”

Jamie has just returned from the US, having had treatment not available in the UK.  This picture shows Jamie going into a scanner, giving the thumbs up – what a brave boy!  We helped support Jamie and his family during their stay in the States.  Click this story header to read the full story of how support from the RGF has made a difference in Jamie’s young life.

School life is tricky and Jamie sometimes struggles to interact effectively with his peers.  To try and help develop Jamie’s confidence, cardio and core strength, improve his motor skills, and generally try and give him a good time, he has been attending swimming lessons and a special needs gymnastics club.  Now the family face some difficult choices. There are the needs of Jamie’s siblings to be considered too – and family finances are extremely tight.

We can understand the impact on Jamie’s young life if these activities have to stop, but at least for the coming year money raised by the RGF’s fantastic supporters can make sure that won’t happen.  You helped make a difference for Jamie.

Read the letter below from Jamie’s mum:

“Jamie is blind in his right eye and his vision is very poor in his left eye.  I describe it as this – imagine you are swimming underwater with your right eye shut and then try to read regular fonts with your left.  That is how he sees.  You have to be within 2 metres for him to recognise you facially but If you speak, then he can track you earlier.

Within weeks of diagnosis, he had a Hickman line put in and started intense chemo for 10 weeks, 3 different types.  One of them, Carboplatin, resulted in him losing his high pitch hearing ability and so by the time he was 18 months, he was wearing 2 hearing aids which we called his magic ears.  These are permanent.

He was in and out of hospital almost weekly, sometimes daily, with many 3 to 4 night stays for 16 months.  I felt like ending it all on several occasions, as I felt as though I was losing control.  He was poorly and vulnerable constantly.  We lived in a bubble within a normal world and had to carry on as best we could for our 10 and 6 year olds.

The tumour stayed the same size, the size of a Satsuma, the whole time more or less.  His walking was delayed, his core strength was poor, he was small and tired…but always fantastically brilliant to us.  He kept us going.  We finished chemo when Jamie was aged 2, in July 2011, and then had a routine of 12-weekly MRIs, 4-monthly hearing tests and 3-monthly vision testing to ensure we had the full picture.  I think it was like a game of chess, the tumour would make a move and then we would.
In January 2013, 18 months after chemo had stopped and Jamie was at pre-school, the tumour began to grow again.  In February, he had debulking surgery, as they can never fully remove it, and managed to reduce it by a third, confirming its histology. Chemo loomed again but amazingly, 22 months on, we have been treatment free.  Not sure how long for…

Jamie started school in September 2013 and needs 1-to-1 for phonics, numeracy, forest school and PE.  He also has to wear glasses as he is slightly long sighted so his near vision is even more compromised.  He struggles to get his glasses on because of his hearing aids.  He looks like a 3 to 4 year old and is a whole head shorter than his peers.

We tried group swimming lessons but it was like a lamb to the slaughter.  Jamie needs direct help.  He has been swimming 1-to-1 for a year and has gained his 20m.  I also started gymnastics with him at the beginning of October.  He absolutely loves it and there are only 4 in his group: 1 very shy boy, 1 who is cognitively delayed awaiting diagnosis, 1 with severe autism and then Jamie.  His coach, Andy Hall, taught Rebecca Addlington her tumble turns!  He would like to coach to the Paralympics.  Maybe Jamie??  It’s one sport where being small is an advantage.

We had another (we are definitely into 20+) MRI on Friday and it was a long day as Jamie has to be starved and then put under general anaesthetic.  On the way home, at 7.00pm in heavy traffic and rain coming out of Birmingham, he asked why he had a naughty lump, what will happen if it grows and when can all the scans stop.  I could have cried!

We got home and later when I was checking my emails, I saw your lovely news and I cried again.  I feel in this whole nightmare people are trying to help him and empower him.

I live every day in fear, sadness and anxiety, wondering what will become of him and watching him struggle alongside his peers.  I have a degree in English and used to be a project manager for BMW before I had children 14 years ago.  I went back part time after my girls, aged 14 and 10 now, but since Jamie was born I haven’t worked and can’t see how I can.  We have so many appointments and the constant threat of going back on chemo.  I am a full time mother.

I hope something can be done to arrest the tumour sooner rather than later because the total loss of his vision is a real concern.  I have asked if this tumour will shorten his life, and although they don’t have enough statistics to say they hope not.  It’s the side effects from the crude treatments as you know well.

People like you are amazing.  In your deepest loss, you think of others in need.  I’m not sure I could be that magnanimous.  What I am crystal clear about is that I couldn’t give Jamie the opportunities I can give him to develop his strengths without people like Rob and you, his family.  I know we can’t bring him back but please know in your heart that we are very very grateful for your help and I hope that brings just a bit of comfort.” 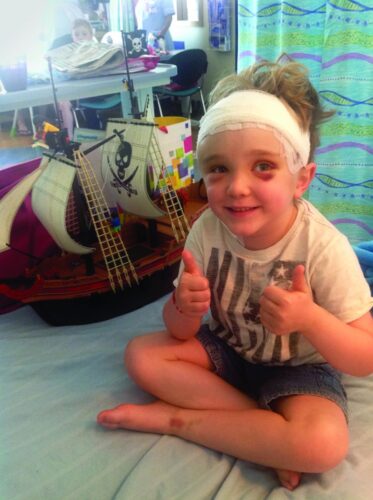