A story to inspire; a story to motivate, and please, a story to share wide and far with everyone you know.

Gypsy’s mum, Chantelle, caught up with RGF trustee, David Cant, last week and shared Gypsy’s amazing story: “Gypsy’s journey started pretty much from birth. She was a very unhappy baby, but at 7 months old she was diagnosed as ‘failure to thrive’ and started to waste away, to the point she no longer fitted in her own skin.

After many tests, doctor examinations, and various cancer scares, at the age of 3 she was finally diagnosed with a brain tumour and with it a rare condition called Diencephalic Syndrome. Gypsy is currently the oldest surviving child with this condition that we are aware of. She was given a 20% chance of surviving at that time and because of the location of the tumour it was/is inoperable, as it is too close to the Hypothalamus and any damage to this could kill her.

Gypsy then started on her chemotherapy plan that was due to last 18 months, but because of the amount of time she spent poorly in hospital, needing antibiotics for infections, blood, or platelet transfusions etc., the treatment lasted 2 years. Gypsy and I spent around one third of that time in hospital. This was very tough on all the family, especially her bigger sister who was only 4 herself when Gypsy started chemotherapy and is now 14.

The treatment had great results and shrunk the tumour so much that Gypsy began to gain weight and actually started to look better, it was amazing, although she had the bald head and other tell-tale signs of being on treatment, she was actually looking better.

After chemo was finished, she was monitored closely with brain scans every 3 months, then 4 then 5 etc. We continued for 5 years like this, but never made it to 12 months between scans, as it kept having little growth spurts and this would put us back to 3 month scans for a while. So, we only got as far as 9 months apart. Eventually in November 2018 she needed to go back on treatment, which is where we are up to now, 20 months in and another 4 to go, she’s now 13 and is simply amazing and just takes everything in her stride, but she kept her hair this time and has had different side effects this time.

The tumour is stable to date and at some point, in the future, she will need proton or radio, but we will cross that bridge when we get there. The tumour has left her with brain injuries that mimic autism and she has conditions such as sensory processing disorder and selective mutism and the chemotherapy has stopped her growth and has affected her hormones, to name just a few things going on.

So, to receive a gift of a laptop from the amazing Rob George Foundation is unbelievable, as Gypsy is home educated it’s means she can do work on it and watch Netflix while at home or even better while we’re at hospital, it really does mean the world and we are all truly grateful to everyone who has made it possible.”

In response to Chantelle’s post, David said: “for all of us involved with the RGF, in whatever capacity, we all know what a great privilege it is to support young people across the UK, like Gypsy. There is no greater example than Gypsy to demonstrate why we feel this way.”

If you would like to support the RGF and make a donation during these very uncertain times when fundraising is particularly challenging, please contact us.
Thank you! 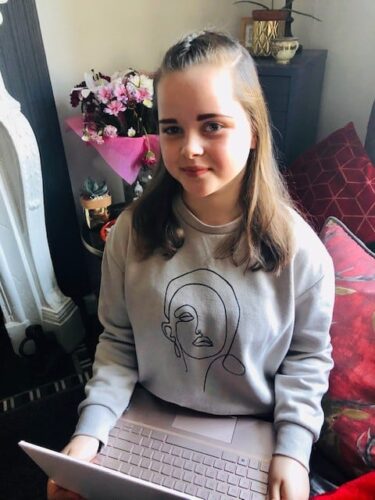