It is nearly 18 months ago that the RGF purchased bunk beds for Edward so that he could spend more time with his brother Dylan.

Edward’s mum, Catherine, has been in touch with an update on Edward’s progress. She said: “So, our beautiful, brave, incredible, and awe-inspiring 5-year-old boy Edward will officially be 2 years in remission in May (which is also brain tumour awareness month). We had the glorious news that his latest MRI scan remains clear of tumour and there is still no evidence of disease.

Edward recently had surgery to remove fluid which had built up around his brain caused by his shunt over draining. A consequence of surgery left him with hydrocephalus, but our amazing NHS are once again exceeding all out expectations and supporting us and him to manage it so that it does not impact too much on his life.

Edward has been left with some mobility challenges and he copes so well, we are reminded every single day how lucky we are to have this incredible human in our lives. Two years ago, we never dared hope that we would be where we are now, and we are making good on our promise to ourselves during some incredibly dark times to make every single day count.

He is our absolute hero; he makes us so proud, and we strive to be better people because of him. Edward and his equally awesome siblings epitomise courage and we are blessed to be living this wonderful life by their side.

Childhood cancer is NOT rare. Brain Tumours are NOT rare!”

RGF trustee, David Cant responding to Catherine’s update, said: “What a wonderful and moving update and so uplifting to see the photos of Edward, Dylan and Edith. Big thanks to Catherine for sharing Edward’s story with us. Everyone associated with the RGF wishes Edward all the very best for the future and keep building those sandcastles!” 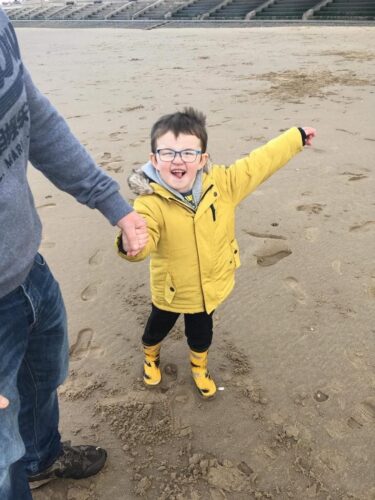