It is always so thrilling to follow the progress of our grantees, irrespective of the type of support they need from us. A great example of this is the recent update from Hannah who is making excellent towards her goal to be England’s number one goalkeeper.

Hannah shared with us: “I have a lot to thank the Rob George Foundation for. I have been lucky enough to receive two grants over a 6-year period which have helped me to get nearer to achieving my dream, that of being selected as a member of the England Lionesses’ squad. The money I received helped me to purchase football boots and goal keeping gloves for my training and helped with transport costs to and from fixtures.

I am the number one goalkeeper for Birmingham City Women’s First team, in the Women’s Super League and I have been since the 2017-2018 season, when I was only 17 years old. It is challenging and I need to make sure that I am prepared for every game and training session by ensuring I put in 100% effort in every time.

In February this year I received an unexpected phone call from Phil Neville, Head Coach of England Lionesses, telling me that he had selected me to attend my first Senior Women’s camp at the She Believes Cup, which is held in the USA every year. I could not believe it; I was so surprised and elated that I burst into tears whilst still on the phone talking to him. Whilst away with the squad it was unreal, I had to keep pinching myself to prove to myself that it was real. Even though I was only there as a training player, I felt I was nearing my dream. Knowing that all of the hard work I had put in over the last few years, and sacrifices I had made, was paying off and being noticed by others.
I was just as excited when I was invited to participate in the Lionesses’ training camps in September and October. Training alongside players who I had previously looked up to and admired has been an amazing experience, knowing that now I am playing and training in the same squad as them.

Thank you RGF for believing that I was worth supporting, your support encouraged me to keep working hard to achieve success and to believe in my dreams.

Reflecting on Hannah’s success her dad, Chris, told RGF trustee, David Cant: “What was so special about the support the RGF gave Hannah was that the grants were significant to us and Hannah at the time, as we were not getting financial support anywhere else. It also showed that someone else had faith in her, not just her parents, which we felt was massively important.”

Hannah’s burning ambition is to become England’s number 1 goalkeeper. Well, she is well on her way and everyone at the RGF wishes her every success as she enters the next exciting phase in her career. 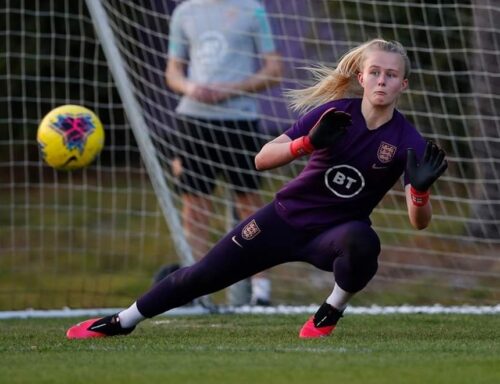