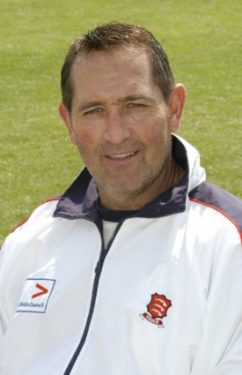 Just nine months old, The Rob George Foundation is delighted to announce that international cricket legend, Graham Gooch OBE DL, is to be its patron.

Graham Gooch has enjoyed a most distinguished career as an international player and coach. He first played for Essex in 1973 and made his Test debut in 1975. During his career he scored 67,057 runs in first class and List A cricket, including 128 centuries, making him the most prolific run scorer of all time. He scored the most Test runs for England – 8,900 – and the most runs in a single Test match – 456. He captained England in 34 Test matches between 1988 and 1993, and is one of only 25 players to have scored over 100 centuries in first class cricket. In 1980 he was one of the Wisden Cricketers of the Year. Retiring in 2000, Graham returned to coach Essex, a role he held until 2005, although he remains the team’s specialist batting coach. In 2012, he also took on the role of England batting coach.

Graham said: “I’ve known Rob’s father, Philip, for many years. We played together in a number of Young Essex, Essex Under 25 and Essex Second Xl games at the start of my career. More recently, we have sat together on one or two charity and community organisations and I am delighted to support the Rob George Foundation. The work it has done has already made a real difference to many young lives.”

Philip George, Rob’s father, said: “It’s an honour to have Graham as our Patron. Rob would have been thrilled at the news! The support we’ve received for the Foundation over such a short space of time has been incredible and is very humbling, and Graham’s appointment gives us an enormous boost.”