Home » News and Updates » A Rob George Foundation fundraising milestone to be proud of!

Our dear and loyal friends at Colchester’s North Countrymen’s Club have now raised total funds exceeding £6,000 for the RGF.
Since the launch of the RGF, John Davey and fellow regulars at the Club have been unstinting in their support, raising funds by various means, including John donating several items from his personal memorabilia collection where the proceeds raised have been shared between the RGF and Great Ormond Street Hospital. John also hosts an annual lunch at Colchester & East Essex Cricket Club and three years ago when celebrating the North Countrymen’s Club’s 75th anniversary the RGF were one of the chosen charities to benefit from funds raised at the event. There have also been plenty of collection pots over the years, too.

On asked, why the RGF? John said: Our Club is a long-standing and popular members’ club based in the centre of Colchester. Many of our members have a very keen interest in sport and knew Rob and his family very well and have therefore been particularly keen to support the RGF since its launch and we hope to continue doing so in the future.”

Rob’s dad and Chairman of the Rob George Foundation, Philip George, replied: The ongoing support we’ve received from John and the North Countrymen’s Club is quite remarkable. It’s a fine example of loyalty and generosity over several years. To put the £6000+ raised into perspective this amount typically supports about 10 young people across the UK, always “making a difference….one individual at a time – we offer our heartfelt thanks to John and the North Countrymen’s Club for their outstanding and consistent support over many years!” 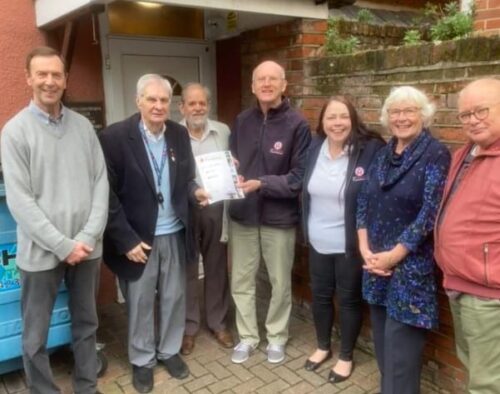