Home » News and Updates » News » A bed for Edward, but it’s much more than that! 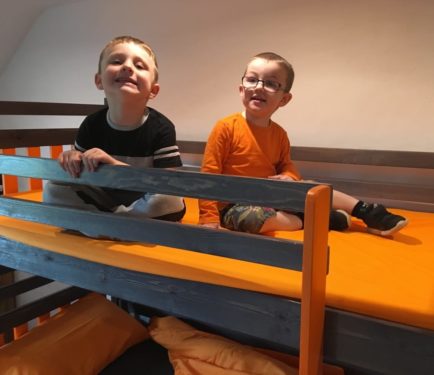 Please find the time to read Edward’s moving story and see how the RGF has made such a difference to this amazing young boy and his family. Our thanks go to Catherine and Shaune, Edward’s parents, for sharing Edward’s story with us:

“Our son Edward is 3 years old, big brother to Edith and younger brother to Dylan, Sean and Danielle.
Last summer we noticed he was starting to lose his balance more frequently and after glasses didn’t help much he was sent for further tests and on 31st October 2018 we were given the devastating news that Edward had a brain tumour. Edward had surgery the next day at Alder Hey Children’s Hospital where 98% of the medulloblastoma tumour was removed. He underwent 8 months of high dose chemotherapy which resulted in him staying in hospital almost all that time due to how incredibly poorly it made him.

His last round of chemotherapy was started on the Easter Bank Holiday and he had a stem cell transplant on 1st May.
We have literally lived in a daze this whole time, it’s like the outside world didn’t exist we could only function to care for the children at home and try to shelter them as best we could from the absolute horror we were living through and travel to and from hospital. We took turns being with Edward so travelled the 80-mile round trip every other day to swap. We had to take time off work and although we both had the most incredible support from our employers, there has been a huge financial strain on the family. At the time you don’t think about money, everything goes on the credit card to deal with at a later date.

On the rare occasions Edward came home he slept on a toddler bed in our room. We promised him and his brother when treatment finished, we would decorate the big bedroom and they could share it together. They both begged us for bunk beds.

We hoped that moving him into a new bedroom with his brother would enable him to feel normal again and have a space of his very own.

Our CLIC Sargent social worker made an application to the Rob George Foundation and we were approved for a grant of £300 to buy the bed. We were absolutely overwhelmed it meant that over the summer holidays we were able to move them into their own room together after Edward had surgery to remove his central line and gastro peg.

They absolutely adore their new room and love being together. We cannot thank you enough for your kindness and generosity it would have taken much longer for us to get the finances to buy the bed as bills are flying in that seem to have more urgency each time. What you have done has put the biggest smiles on their faces after some very very dark days.

I’m happy to tell you that Edward rang the end of treatment bell on 19th August and his last scan showed no trace of tumour or disease. With a bit of luck that’s treatment complete, we pray that’s it’s for good and in the meantime, we are spending our days with love and laughter.
From the bottom of our hearts thank you.”

All of us at the RGF send our best wishes to Edward and his amazing family and thank them again for sharing their story with us – you inspire and motivate us all!