The Rob George Foundation Anniversary Ball will be held on Saturday 9 January 2016 from 7.00pm to 12.30am in the fabulous surroundings of The Hurlingham Club in London.  This will be our second Anniversary Ball and promises to be even more spectacular than the first!  Join us for this evening of entertainment, music and food, and help raise money for the work of the Foundation.

TAKE PART IN OUR SILENT AUCTION

The silent auction which will run up to our Second Anniversary Ball on 9th January 2016 is now LIVE for bidding!  Just some of the fabulous prizes on offer include a trip in search of the Northern Lights,a steam-train ride to the Cheltenham Festival and some amazing sporting memorabilia.  Click here to find out more.

Good luck, and thank you for supporting the Rob George Foundation. 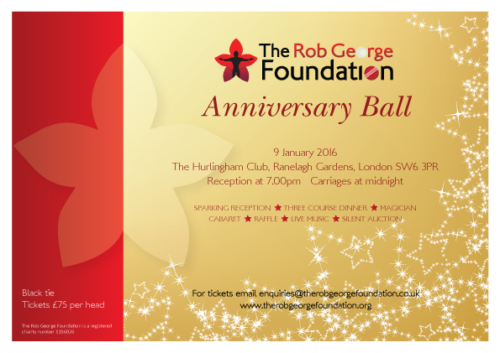